My natural domain is writing cookbooks and parenting books. I do OK when it comes to writing about yoga and yoga philosophy too.  But I struggle with literary fiction.  Catching Infinity is being worked on at the moment by the talented editor, Steven Mair. I have begun my second one, with the working title The Sisterhood. Here’s an excerpt (Chapter Thirteen) inspired by a beautiful day looking for the South Down’s version of Jorge Luis Borges’s Strandbeesten with my partner, whose goodness inspires this book: 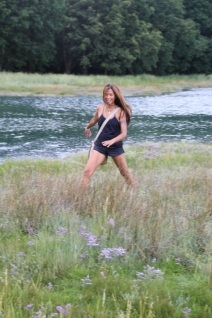 When he was a little boy, John McDermott wanted to be an anthropologist like his parents though his mother had died young, drowned, whilst searching for some obscure tribe in the Papuas.

John’s father had shrugged, tears somewhere in his gruffness, as he said to his young son, “She’s gone where she travels freely; it’s just you and I now, boyo.”

Death is but a horizon, just the limit of our eyes. Maybe that was what drew young John to become a doctor, this tightrope between life and death beckoned him from a young age, the way small children are compelled to peer over the edge of a tall building, wondering what it is like to jump off its great height, to fly without wings.

But actually, not. John still remembered the evolution of his thinking, from wanting to be an anthropologist to being here, ending up as a heart surgeon. It had started from his years of reading Jorge Luis Borges’s The Book Of Imaginary Beings under the duvet after lights out in the boarding school dorm at Winchester. Then he had wanted to seek out the mythical beings with exotic names. On his childhood holidays to Holland, the young John had looked out of the car window at the dykes, floodgates and canals. The Dutch had built them to prevent flooding and in the process, had created new landscapes. And according to Borges, this was where the Strandbeesten lived. The Strandbeesten were mechanical life forms, some as large as houses, others as small as dogs, but they all had arms like windmills and legs that were composed of triangles. They resolutely marched along the windswept dykes, floodgates and canals like mechanical millipedes. Strandbeesten walked the many miles but they never ate. They simply incorporated cordage, lumber or durable shells into new body parts. When parts wore down, the Strandbeesten freed the newer parts, and hence, the daughters were born.

Wasn’t that, in its barest form, the basis of life? Someone – John cannot remember whom – said that we walk, we reproduce, for that is the basis of life. We share this commonality across the board. Borges wrote too about Animals In The Form of Spheres, of which the Earth is the largest one. The Earth, an animal? But think of the mercury beating heart and of the weird stone flowers of Glauber’s chemical gardens.

Later, divining entrails of cadavers at Manchester Medical School, John knew that there were no difference at all between Borges’s Book Of Imaginary Beings and the world that we call real. And being in an induced coma, hovering between wakefulness and chemical sleep, he walked that very tightrope of his childhood imaginings, only that it was less frightening when it was actually happening. With his eyelids taped shut to protect his corneas, he saw a lot of things. Why is it that human beings see best with their eyes shut?