Told in the story of An Evening In Wonderland, topology is explained as thus:

It is said that hell is where the mind is. His Ouma told him that in her dark, forbidding Voortrekker way. And hell was indeed where PW currently resided. He could find no peace, and took to prowling the long corridors of CERN at all hours, checking on the progress of the all-night experiments that ran here in the vast, sleepless underground labyrinth.

“You look haggard, Professor,” Alice remarked, surveying his hooded eyes and hair that stood on ends as he ran his fingers countless times thorough it. He looked more like an angry Mohican than a world famous professor of theoretical physics.

“Blerrie hell,” he laughed self-consciously. I must build myself a quiet room in my brain.”

It was good to speak to her, he thought, because she understood. She understood all of him. And much, much more.

And so, they talked. They discussed the quietest place they could build on earth.  A box to which a very strong vacuum pump is attached to remove all air molecules so that there is no sound. The box is suspended off the ground so that it is insulated from both sound and vibration. And it is lined with thick steel walls so that there are no wifi, radio waves or anything. 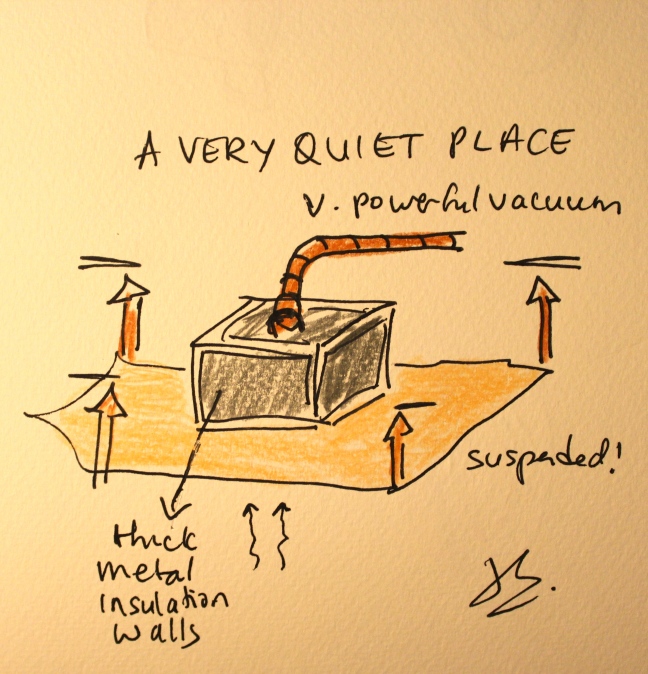 “I would be able to sleep then,” PW joked. “No demons can get into that box.”

“You forget, my dear Professor, that there will be elementary particles popping in and out of existence disturbing you in your insulated box, because nothingness is actually not empty. It is teeming with the potential for life, for matter, because nothing does not exist.”

Strange matter, and matter than can exist in strange states.

And indeed, the latter is the gist of the 2016 Nobel Prize for Physics winners’ research topic: matter that can assume strange states. Matter in these strange states plays a big role in superconductivity and superfluids, where it flows with almost zero resistance at low temperatures.

The three guys who won the big prize this year used topology to study these weird phenomena. Why topology and what is topology?

Well, simply because topology simplifies things. It is the maths of shapes, but unlike geometry, it is a lot simpler and whole lot more relaxed. Measurement and accuracy don’t really matter in topology, unbelievable as it may sound.

Because the only thing that really matters in topology: is holes, namely how many holes you’ve got. A teacup with a handle and a donut is the same thing topologically because both have one hole each, and if made from squidgy rubber material, you can morph one into the other.

Basically, it is about what you can do with squidgy rubber ball, donut, pretzel, complicated knots…depending on how many holes you want in your model. But apart from the number of holes, the type of holes are also taken into account: the hole you get from cutting through a length of ribbon (1-D), punching a hole through a piece of paper (2-D) or the hole inside a balloon (3-D) are examples of different types of holes.

So what’s the big deal?

This is it: using this unbelievably simple model, scientists can begin to understand and explain the behaviour of really complex stuff (and predict new phenomena), because an average substance may contain a trillion trillion atoms, all interacting with each other.

“Gee, all this talk makes me feel like eating a donut,” PW said with a grimace, playing idly with a rubber band on his desk, wondering how many holes he can make out of it.

“Eating won’t help, because you can’t hide from your thoughts, Professor,” Alice said wisely.  “You just have to make peace with them, like untie the Gordian knot.” 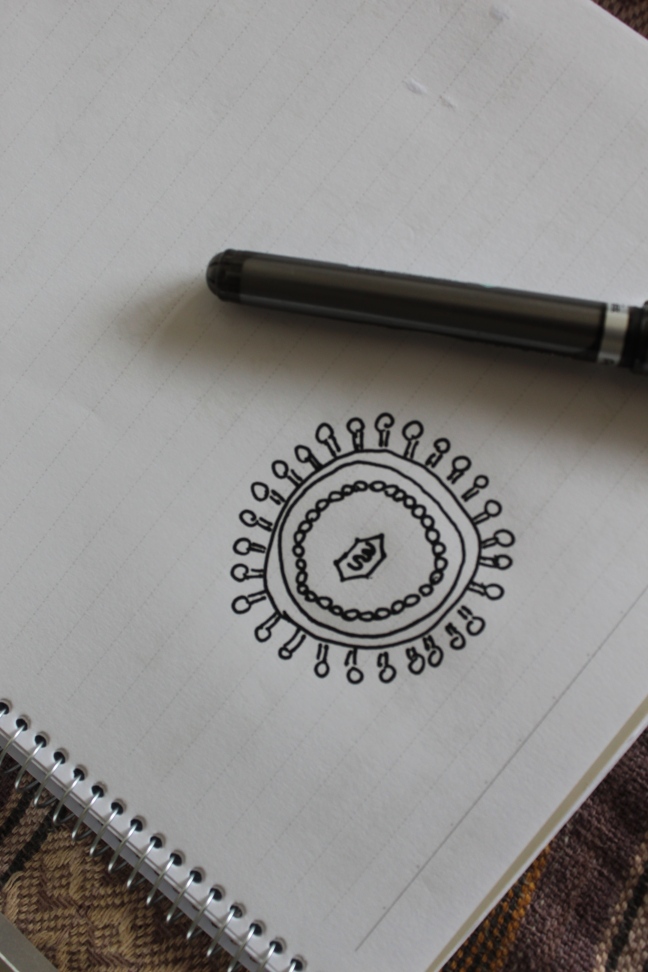 At first glance, you might think that this drawing is that of a mandala or some mathematical shape which I am so fond of. But actually, it is a diagrammatic representation of the Barr-Epstein virus.

Virus symmetry is one of the most beautiful, naturally occurring structures of nature. Though incredibly tiny (the smallest animal virus is the one that causes foot-and-mouth disease at 20nm), viron symmetry is highly structured and falls into highly organised categories: helical, polyhedral (cubical) and binal symmetry.

Not so bacterium structures which sometimes look like primitive spaceship.

My daughter who is studying Biology for her International Baccalaureate commented dourly that there is so much stuff to learn for this subject. I don’t want her to just memorise stuff, but to be excited by the knowledge (or else the three years of preclinical medical course would be hellishly long for her).

So relating virus and bacteria to us and our daily lives:

Virus and bacteria cause infection in the body. When their presence is detected, the body switches on its inflammatory response, which is its strategy for fighting infection.  However, inflammation can kill, though it was meant to be our body’s lifesaving strategy.

But here’s the useful piece of information that you might not previously know: virus and bacteria cause different types of inflammatory responses. Studies done at Yale University by Ruslan Medzhitov showed that a body recovering from colds (often caused by viruses) benefit from feeding, whilst those suffering from fever (typically caused by bacteria) should be starved, especially of carbohydrates which breaks down into glucose. For me, this is a really exciting discovery because it means that Medicine can move forward from blanket prescription of antibiotics – which does not work in many cases anyway – to a wellbeing system of managing health through nutrition.

The old adage of feeding the cold and starving the fever seems to be on its way to be proven ‘true’ by modern scientific establishment.

In the meantime, I leave you with some viruses.

Note: In my novella which will be published on the 21st November 2016, An Evening in Wonderland – A Brief Story of Maths, Physics & The Universe (suitable for young adults), the protagonist Alice Liddell urged her beloved Professor to close his eyes and look for the symmetries in the world within and also out there in the universe, for within the shapes lie the truth that he was seeking.

You can read an interview with Ruzlan Medzhitov in the New York Times by clicking on the link here.